There are numerous photography figurines from different artists and various collectible brands. Here is a modest variety of very memorable artworks that have photography as its theme, although the artists do not specialize in photographic subject matter. From comic to serious the moods vary with each photographic piece. These artworks are scattered about on the internet rather than found under a common banner.

One such artist is Guillermo Forchino (1952) who was born in Argentina and lives in France. He lives in Paris with his studio next to the famed Pere Lachaise cemetery. Since the 1980’s, Forchino experimented with different materials in creation of his artwork. In the end he chose polyresins to create his figurines resembling comic strips and cartoon characters. He began offering his artwork in partnership (2003) with VMM (Netherlands) under the name “The Comic Art of Guillermo Forchino”. These reproductions are handmade and hand painted, often in the same size as the originals, as limited editions in numbered series. In the Professionals series we have The Photographer. (Forchino.com).

In the late 1960’s, Michael Ricker (1940-2006) started Ricker-Bartlett in Estes Park, Colorado. He produced pewter jewelry and sculpture using new molding and casting techniques taught to him by Norb Bartlett. Ricker-Bartlett began selling Pewter PeeWees, small pewter animal figurines which featured chubby-faced anthropomorphized animals, young children and newly hatched tiny animals. In 1975, in honor of the nation’s bicentennial he started his masterpiece Park City, a 30 foot by 10 foot miniature town depicting life at the turn of the 19th century. It was completed in 1986 and presented to former President Gerald Ford at a gala event in Denver. Featured among the work’s more than 470 pieces are a carousel, a town hall, a circus parade and a riverboat. Park City became the foundation for Michael’s Museum and Gallery in Estes Park, which opened to a gala event in 1993. (Martin).

Rochard Limoges (1973) is not an artist’s name but a brand name for hand painted porcelain Limoges boxes from Limoges, France. They claim to be the first to add removable art objects from inside their boxes. Most of these boxes are small, usually less than three inches to a side. The Rochard Limoges Camera with Film & Photo box is hand painted by foremost artists using many of the same techniques that were used during their introduction in the 17th century. (Rochard Limoges).

You can easily find photography themes in figurines made of different materials. In style they range from serious to comical. Some tend to be mass produced to some extant while others are one of a kind handmade. They also range in size from less than three inches to a side up to over twelve inches tall. A large collection would seem eclectic when you display the pieces together. 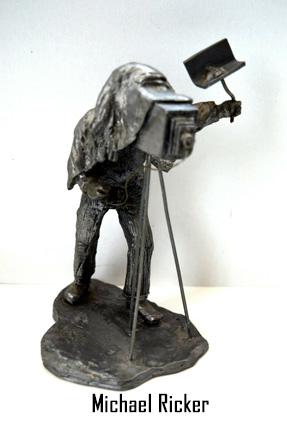 The Comic Art of Guillermo Forchino